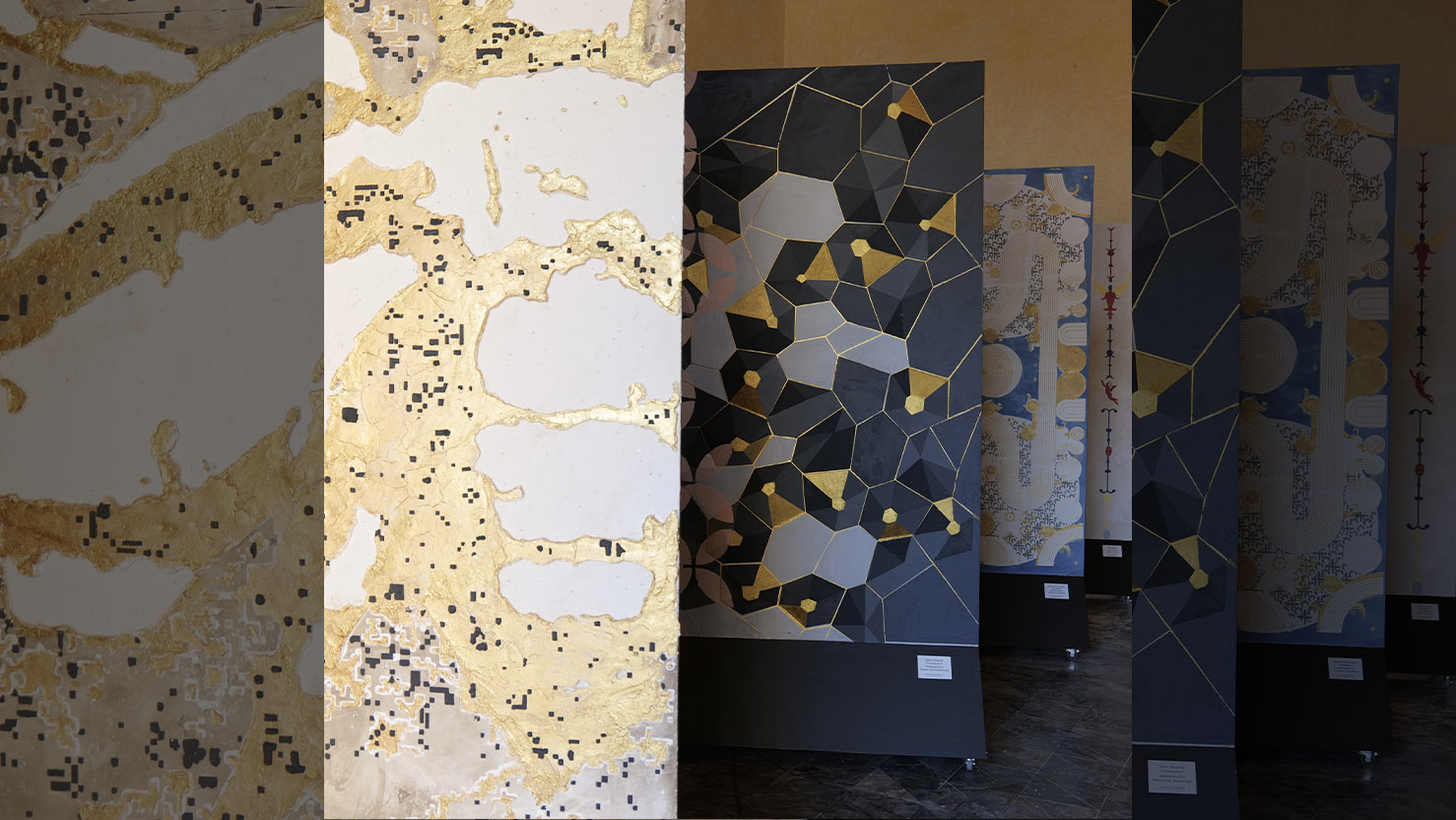 Novacolor is sponsor of the contest "Beyong the Classic schemes"

Baroque and Neo-Baroque transform architects and master decorators into artists, breaking the classical schemes and eliminating any constraint on their freedom of expression. The decorative exuberance and the acute sense of theatricality push artists to conceive their works as dramatic sets of reality and nature, using all the necessary expedients to create pathos and arouse the amazement of the public. Hence the immense repertoire of perspective deceptions and fictitious openings of space, multiplication of vanishing points, light and shade games, polycentrism of the composition, be it architectural, plastic or pictorial.

Starting from this inspiration, Novacolor, a brand specialized in decorative finishes for interior architecture, in collaboration with the partner Leggio Ferramenta & Colori and the Sicilian Festival "Baroque and Neo-baroque", has given life to the contest "Beyond the Classic schemes". The competition, which was held in Ibla (Ragusa) from 15th to 18th September 2022, was aimed at architects, decorators and artisans, who were able to discuss and express their idea of art and nature, with reference to Baroque exuberance. 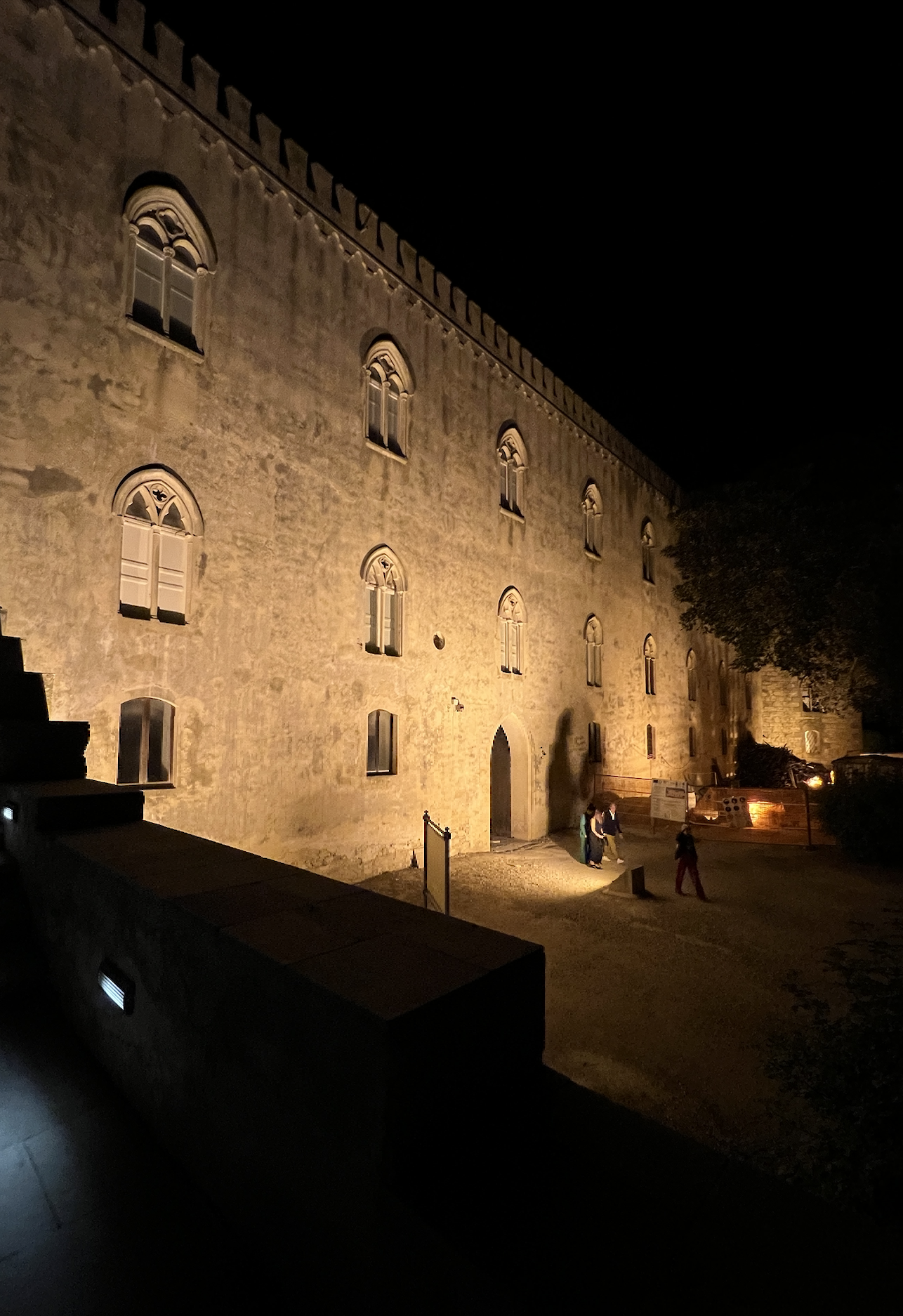 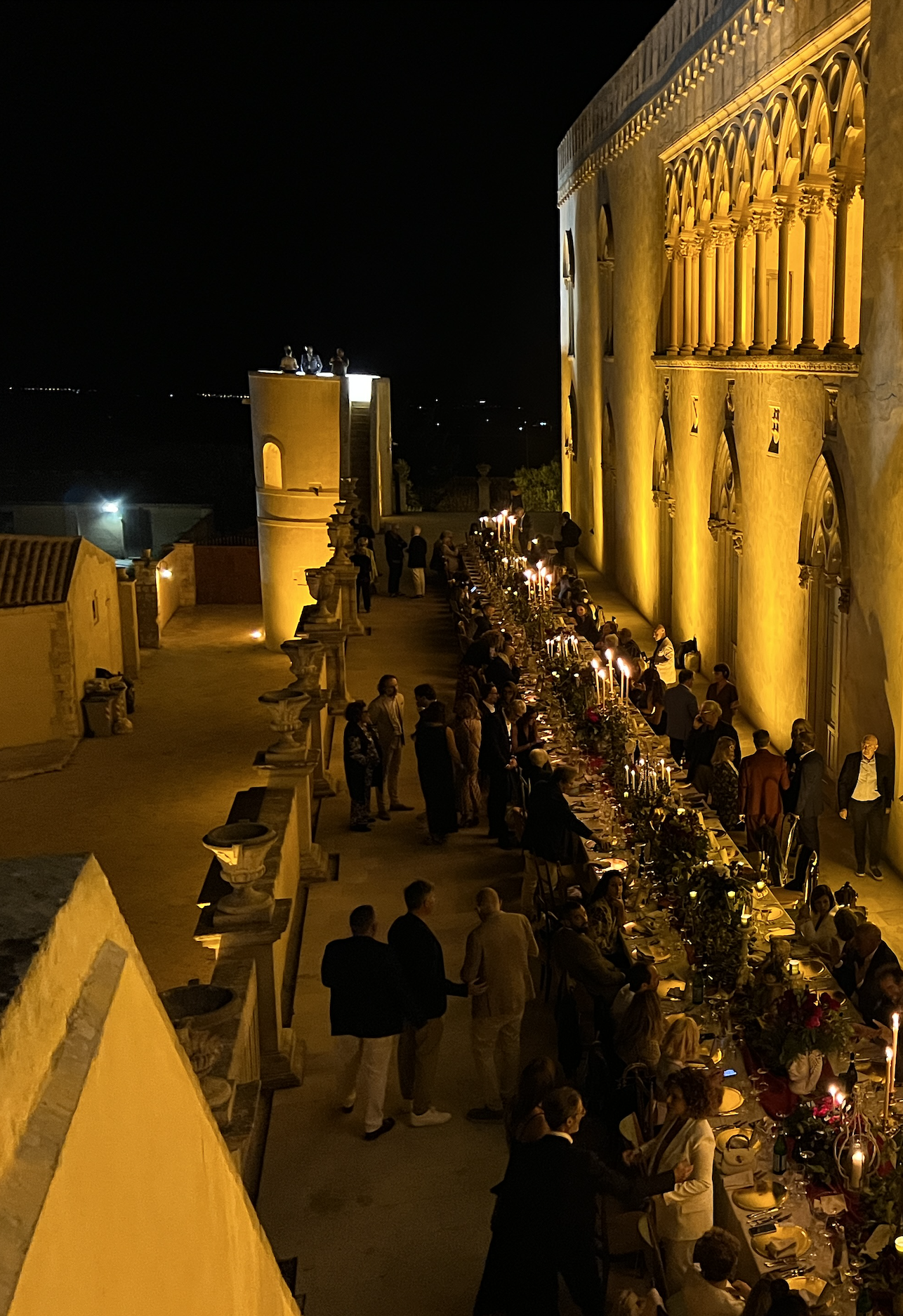 Eight architects and designers, assisted by as many decorators, interpreted the proposed concepts with Novacolor products, realizing them through decorative panels. Four of them, Silvio De Ponte, Matteo Cibic, Muia Parapini, Alessandra Grasso, were led respectively by the Novacolor Ambassadors Stefan Van Suetendael, Catherine Godier and Chrissa Louccetti and by the master decorator Fabrizio Campione. The remaining artists in the competition Davide Scrofani, Roberta Sortino, Stella Orlandino and Daniele Salfia, were instead supported by important decorators selected in the area. 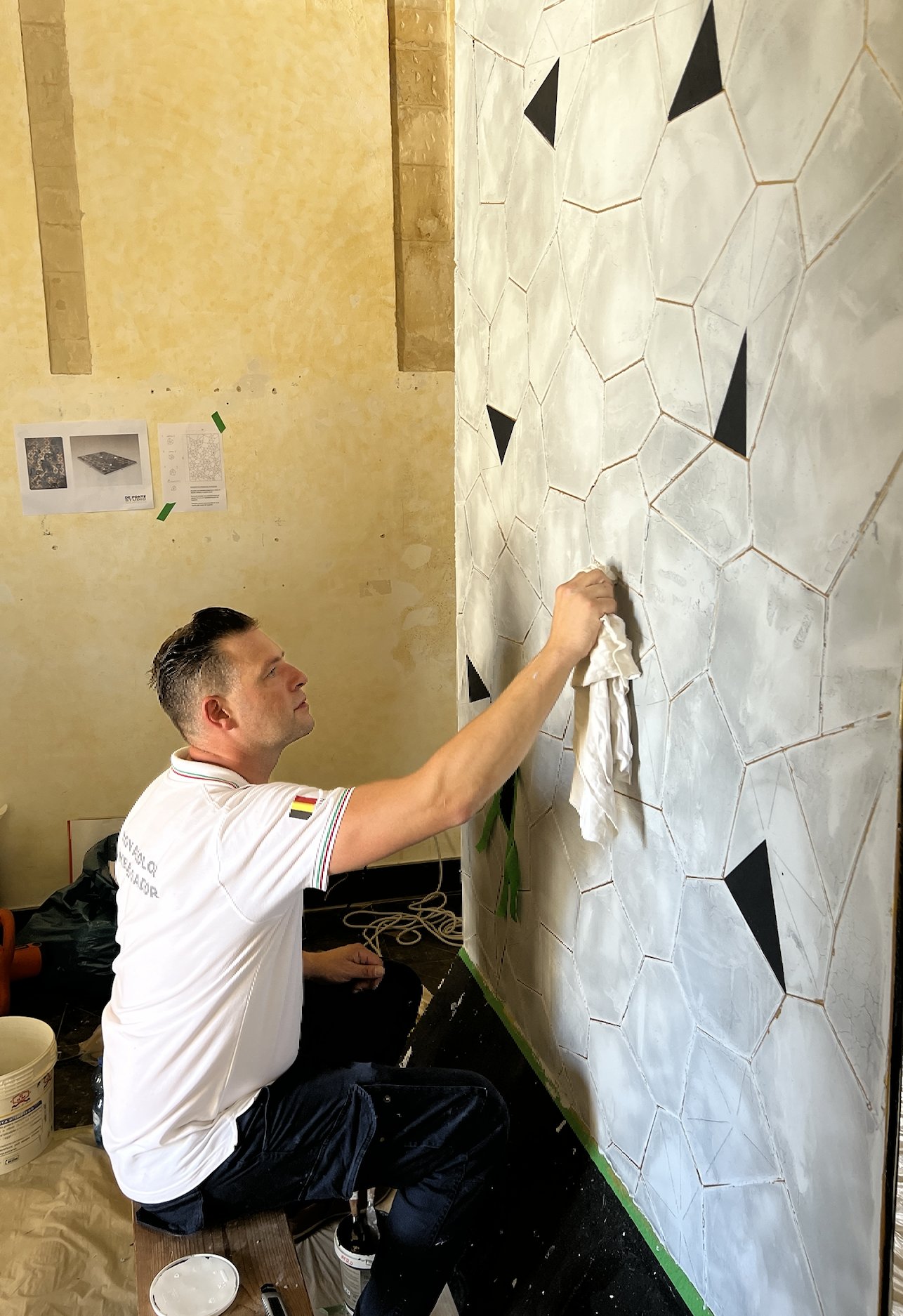 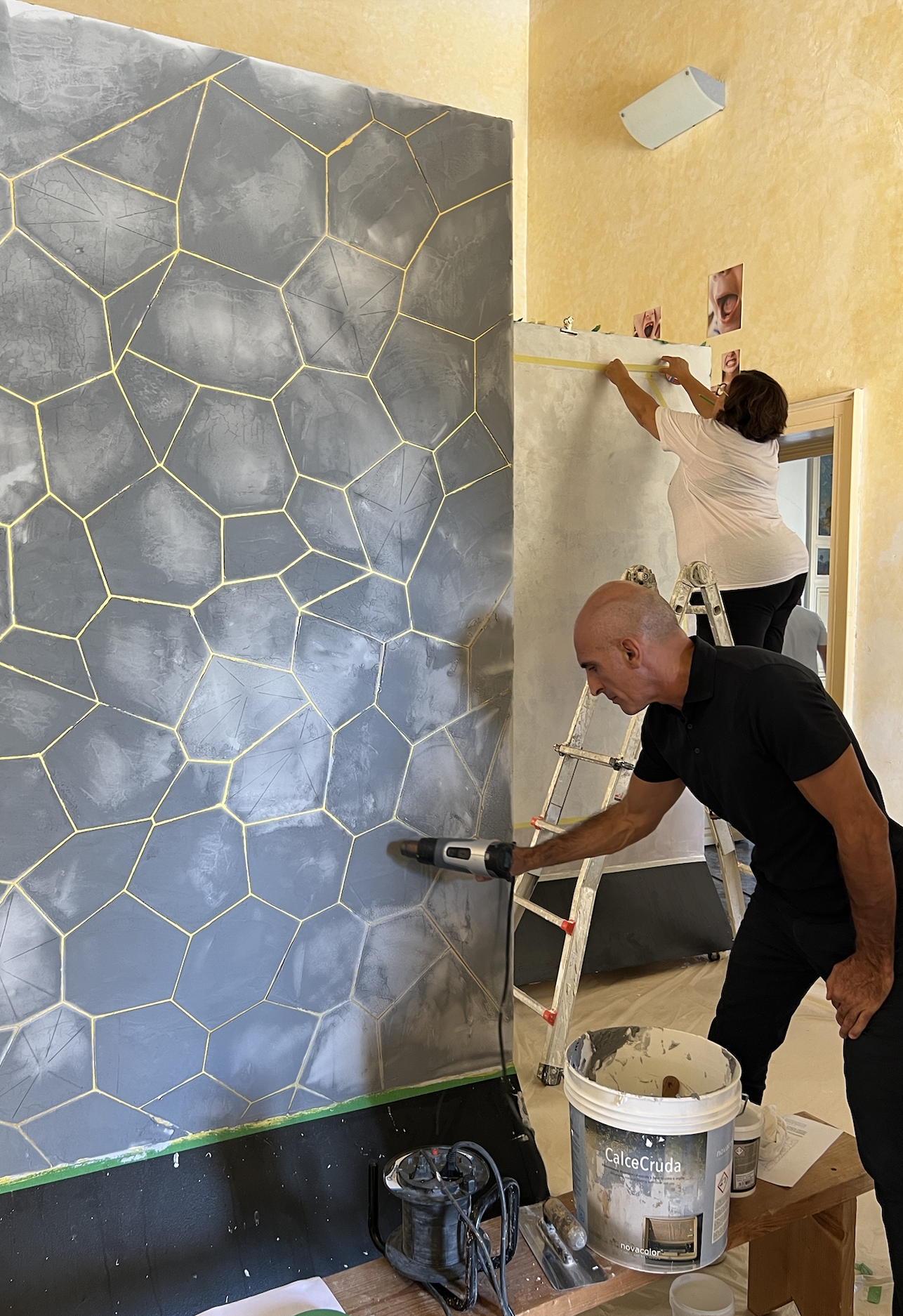 The jury of experts selected to decree the winners of the contest saw great names of the Italian design scene:
-  Gilda Bojardi, editor-in-chief of Interni magazine, winner of one Ambrogio d’Oro and nominated Ambassador of Italian Design for the Italian Design Day.
-  Cristina Morozzi, journalist and writer, was art director of Coin Casa design brand (2007/2009), of the furniture brand Skitsch (2009/2012) and coordinator of the Altagamma Foundation.
-  Roberta Vecci, international marketing director of San Marco Group.
-  Roberto Semprini, architect, designer, professor of Design at A.B.B. of Brera-Milan and creator and artistic director of the Baroque and Neo-Baroque Festival.

After two days of work and preparation, the victory went to Davide Scrofani of DFG Architetti Associati, architect from Ragusa who is an expert of Architecture Technology and executive project. His concept, made by the hand of the applicator Adriano Leggio, expressed his baroque soul through the Novacolor products Archi+ Pietra Intonaco, CalceCruda, Eclat_Wall Painting, Marmorino KS and Fase Silossanica. The work compares the language of the past with that of today. On the one hand, the bee, the symbol and figurative signifier that refers to the Barberini family and to one of its greatest exponents, Urban VIII, who commissioned some of the greatest Baroque works. On the other hand, the pixel, the primary and irreducible component of digital screens, and also the fundamental unit of current QR codes, which are therefore also message vehicles. 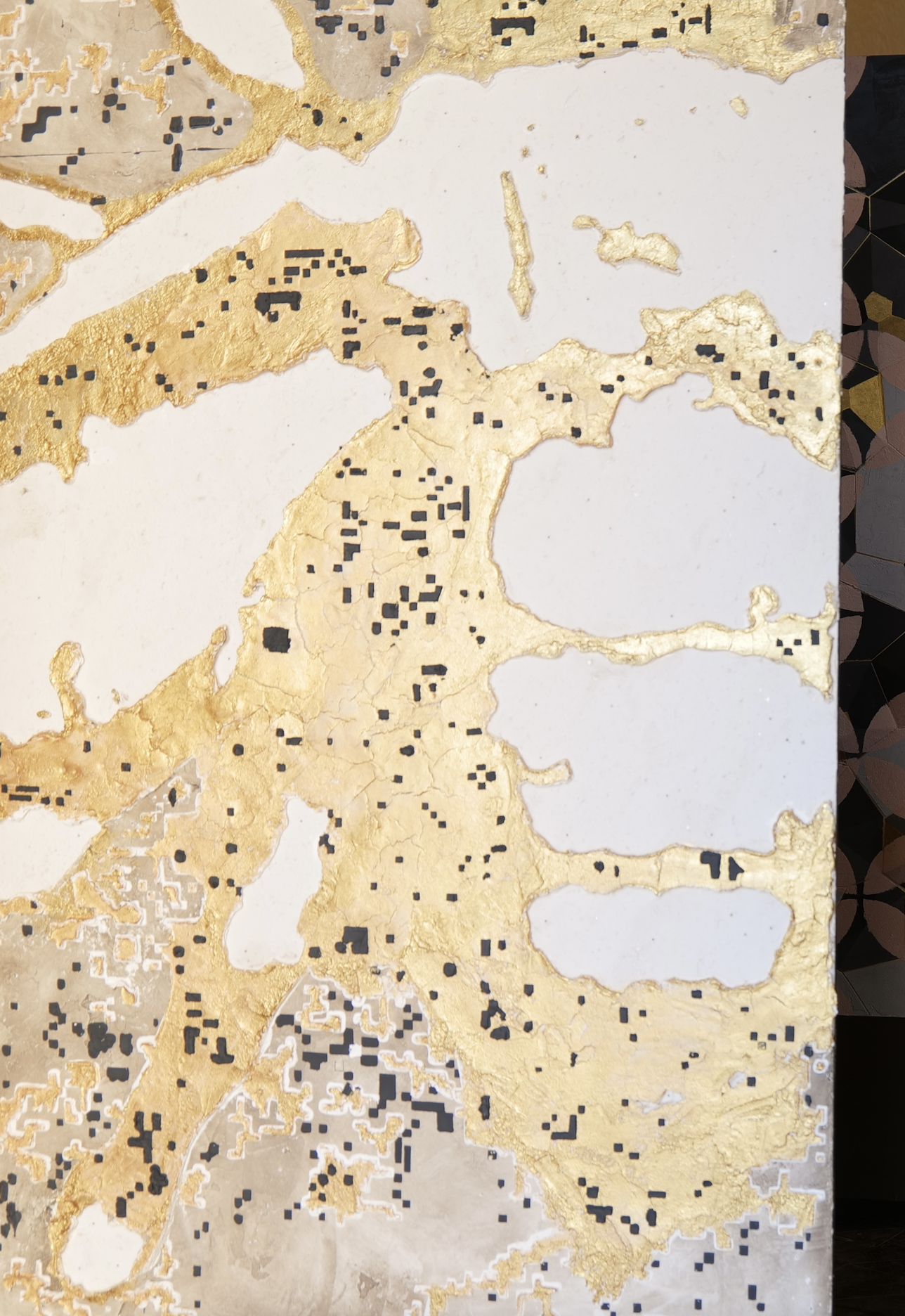 The second position of the podium was conquered by the couple composed of Muia Parapini and Chrissa Louccetti with a work in which the decorative art of wonder and enchantment is translated into the representation of monstrous, hybrid, imaginary beings: the oneiric subjects were represented in a calligraphic way with thin lines that intertwine in a symmetrical way and overlap to the point of pushing the eye to seek new amazement. 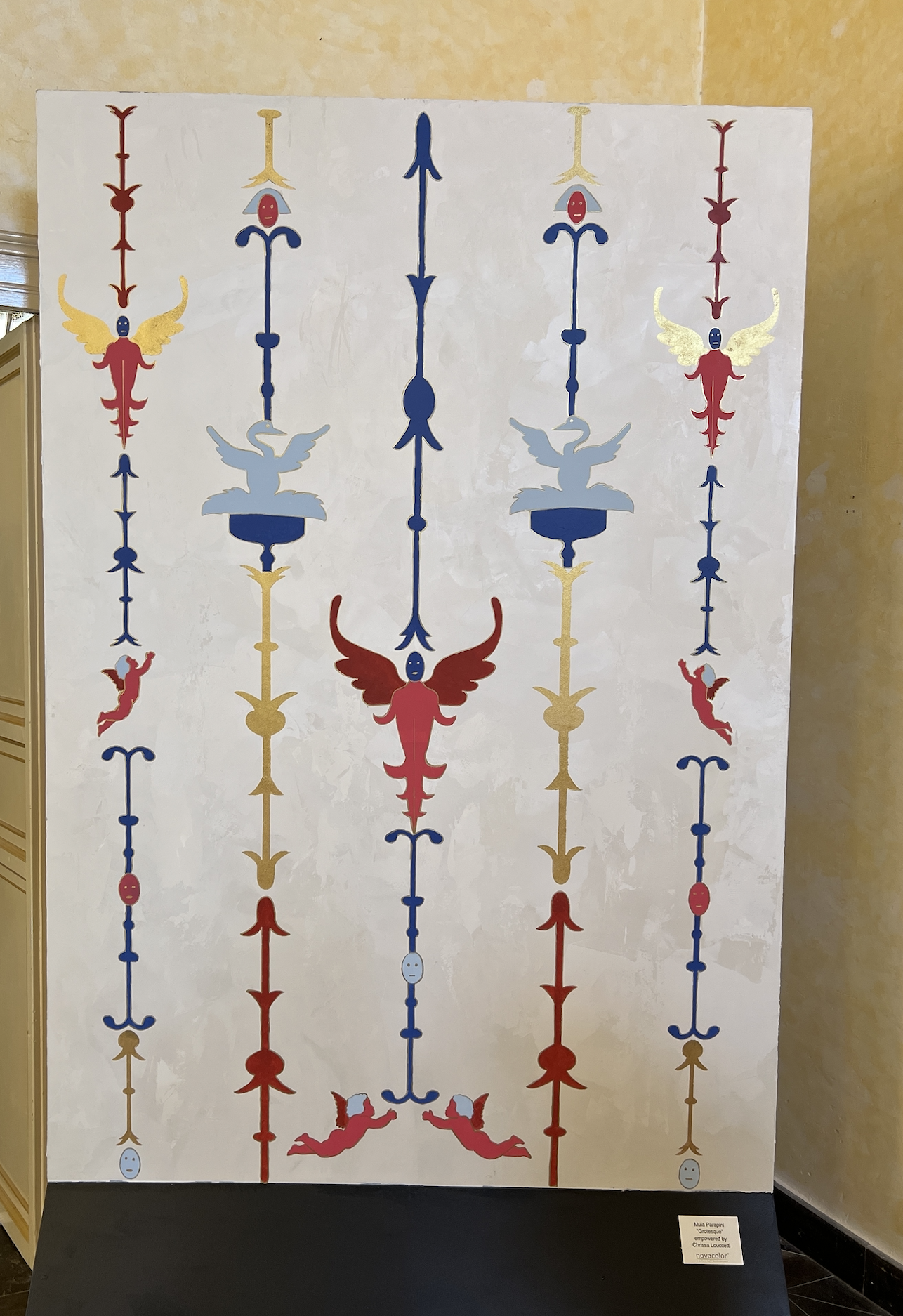 Third place for the designer Alassandra Grasso and the master applicator Fabrizio Campione with a decorative panel made in layers that pays homage to the bright blue skies that were the background to the wonderful landscapes and swirls of Baroque figures. To complete the work, a game of lime crosses and octagons that evoke the dome of San Carlo, and a staggered overlap of lime and gold metal lines that revive the sinuosity of the Baroque decorations. Special mention to the architect and designer Silvio De Ponte and Novacolor Ambassador Stefan Van Suetendael who created a work focused on the search for an aesthetic and communicative form in which we witness the loss of the entirety of the project, of its globality, of the orderly systematic nature, in exchange for instability, of poly-dimensionality, of changeability. The final result tells of a multifaceted surface, made of smooth but also concave and convex parts, which are linked to a two-dimensional graphic “order” superimposed on the three-dimensional volumetric one. 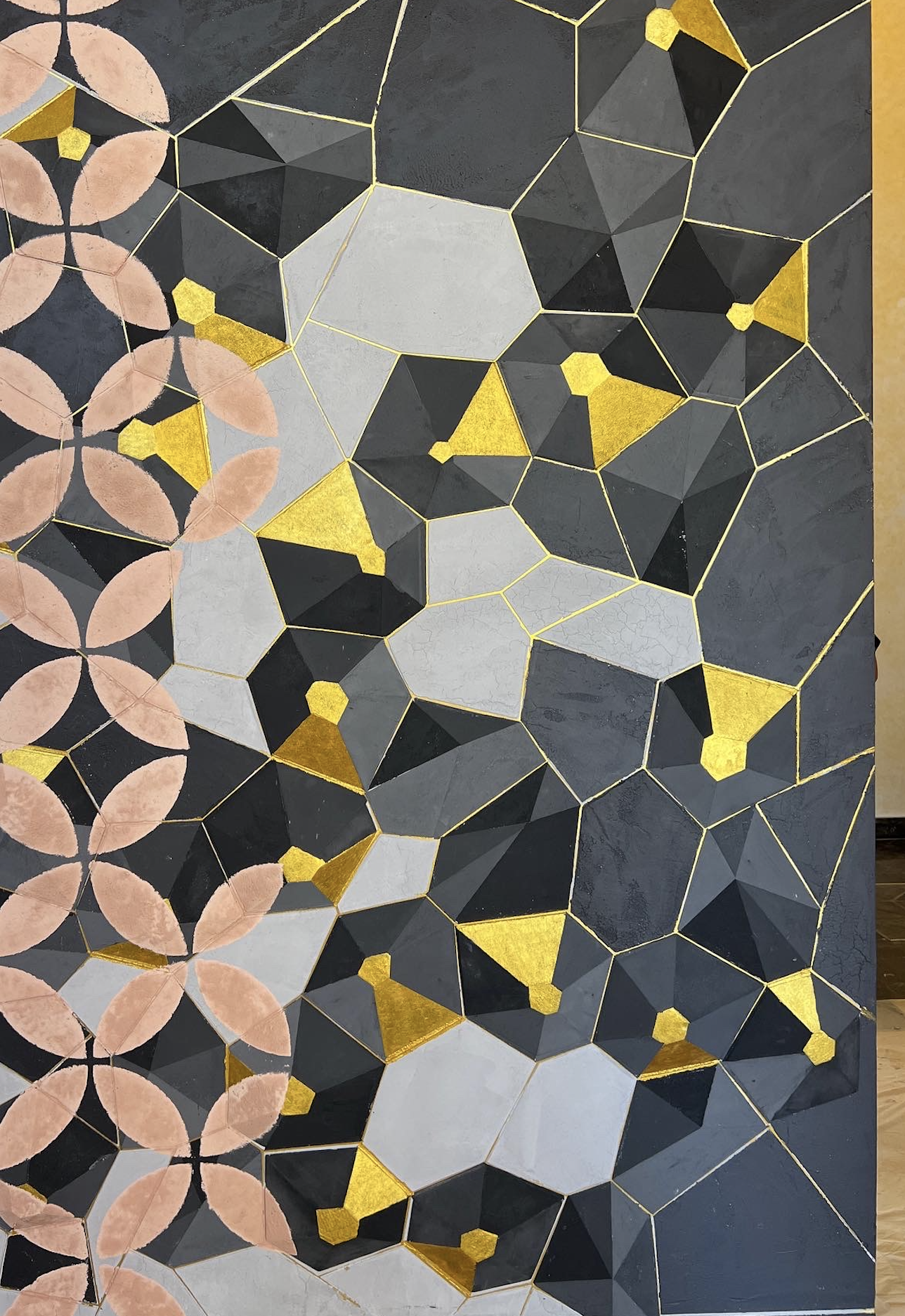 Thanks to the contest “Beyond the Classic schemes”, art and crafts come together in the name of Beauty.

The Group calls companies, institutions and start-ups to join in new synergies to identify innovative compounds and cutting-edge technologies to reduce the environmental impact of products. 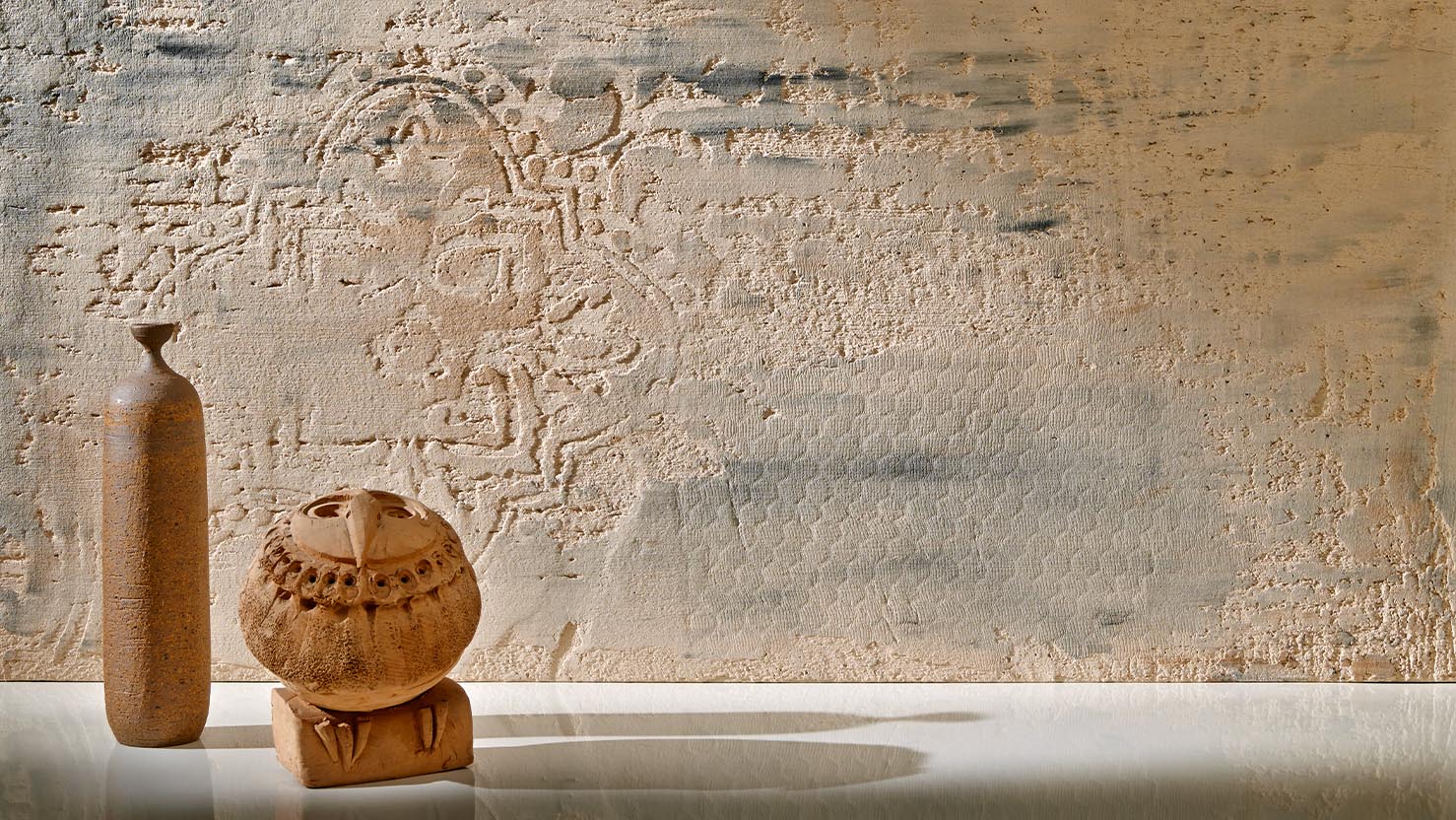 Sustainability and innovation respond to the latest addition to the Nova-color mineral plasters: discovering Archi + Argilla, the new plasters made of natural clay 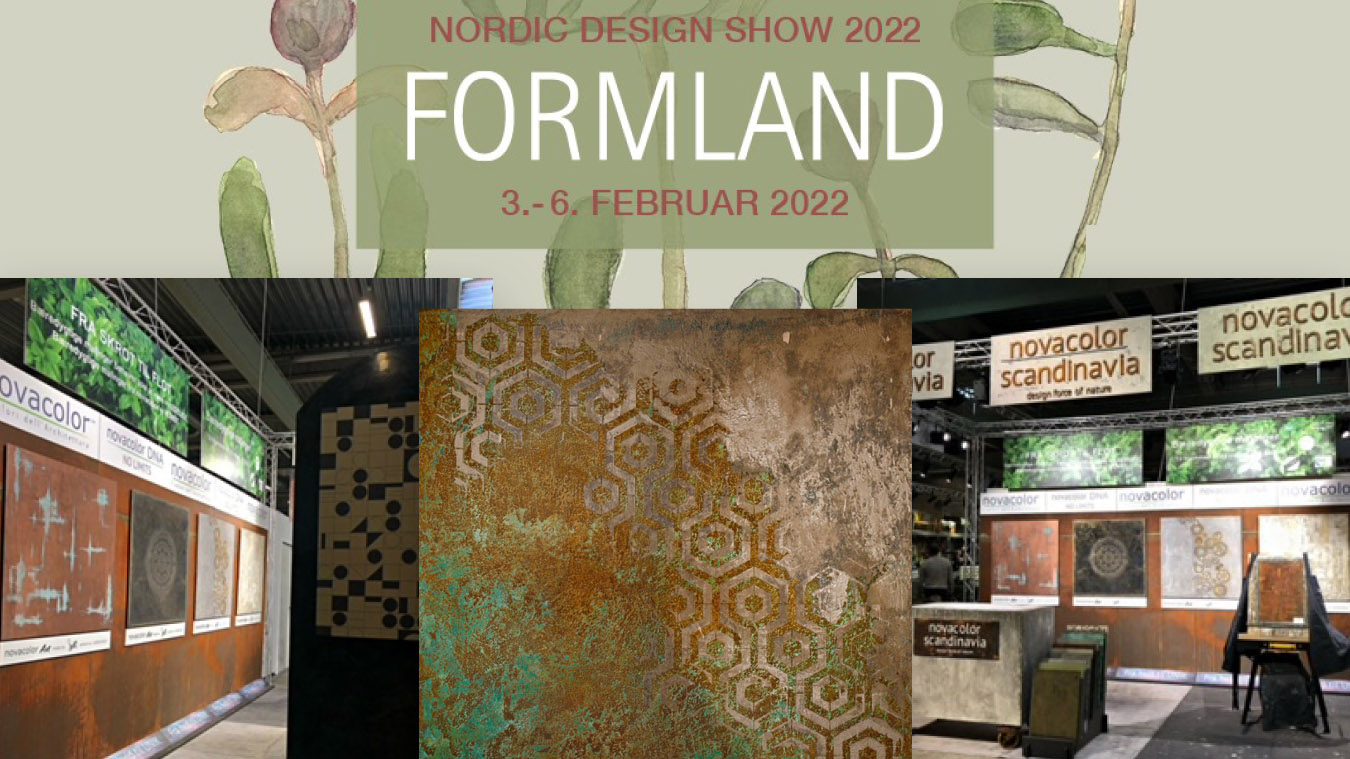 Iconic products, new finishes and the theme of sustainability at Formland, the most important Scandinavian fair dedicated to Nordic interior and design